An anonymous call was made to the police about a child possibly being beaten. First responders came to the residence on the 300 block of Gillett Avenue in Waukegan, Illinois and saw that the child was no longer breathing and could not be revived. She was found on the floor of a bedroom vomiting. Emaciated and with her stomach severely distended. The Waukegan firefighter-paramedic Rynders said it appeared that she had been dead at least a half-hour prior to the call. She looked almost as if she were a cancer patient.

Waukegan Detective Shields was the first on the scene. The mother told him she got sick after eating sauerkraut for her first time. He noticed that she was extremely skinny and malnourished but saw that her stomach was distended and bloated. He noticed bruises and scars on her body. 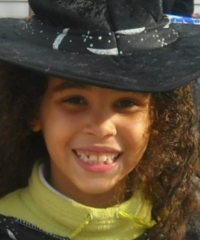 Waukegan Sgt. Cory Kelly said the 11-year-old weighed only 60 pounds, and the home was found to be a mess when officers arrived with a search warrant after the death.

“The home was dirty and they found vomit that had not been cleaned up,” Kelly said. “The defendant also admitted to beating the girl with an extension cord in the past.

The mother punched Raashanai in the stomach so hard it perforated her stomach and eventually killed her. The punch went all the way to her spine. The mother killed her eleven year old daughter. Evidence showed the abuse was long term.

Raashannai’s six year old half-brother told police she was kept in a locked closet inside the parent’s bedroom, rarely fed and often beaten. The closet had a sink but no toilet. She would be beat if she used the sink as a toilet. He said they were not allowed to talk about Raashannai because she was B-A-D (spelling it out). She would steal food. She was not allowed to eat with the family. She did not eat regular meals. Sometimes she would be beat with the mothers hands and other times with a belt, sometimes with a stick. He and his older sister would get Christmas presents. Raashannai would get none. The other kids went to a regular school, while she was home schooled. She would be locked in a closet when guests would come to the house. Friends never came to see her. He said the parents would get in trouble if they talked about her to anyone and that someone might call the police. No one in the household ever spoke about her. A few day before he was taken to live with someone in the family, she had what he described as a ‘big belly’ even though she was skinny. She cried a lot but he was told she ate ‘bad sauerkraut’.

Raashanai was fed one bowl of cereal a day.

In 2011 police were contacted on a domestic violence call at the residence by a neighbor. When the cops arrived they saw marks on her face and she admitted she was hit.

The mother took video clips of beating and screaming at her as she cried and whimpered. The videos were recorded by the mother April 3 and April 5, 2013. It is clear in the videos that the mother was not the one who shot the videos. Someone else was recording them. Apparently no one else has been charged in any of the crimes against Raashannai.

The Chicago Tribune put a timeline together of Raashanai’s reported contact with DCFS and law enforcement.

· April 2003: Raashanai is born in Gresham, Ore., one month after her mother pleads guilty to pandering an underage girl for prostitution in Nevada.

· 2005-06: Mother voluntarily signs over guardianship of Raashanai to the woman’s father and stepmother after Oregon child protection services investigates her for possible illegal activity and exposing the girl to the mother’s adult business. She earlier lost custody of her firstborn.

· 2006-08: Mother gets Raashanai back and brings child to live with her and new husband in Texas and, later, Illinois.

· 2010: First documented contact between Waukegan police and Raashanai’s family; mother called to ask about her rights to return to Oregon with the children because husband is verbally abusive. Police visit the couple on multiple occasions.

· August 2011: The husband is charged in Waukegan with battering his stepdaughter, Raashanai. The Illinois Department of Children and Family Services does not take temporary protective custody. The girl’s mother bails him out of jail. He later pleads guilty and is placed on supervision.

· July 2013: DCFS receives a hotline call but, rather than accept report, tells caller to contact police for child welfare check. Police have no record of caller making contact.

· June: Police go to home to investigate complaint of possible child abuse, but leave without seeing Raashanai. No follow up.

THE GUARDIAN reported about the possibility of sexual abuse.

When she was two, she was sent to live with her grandmother and grandfather for several months while her mother, Nicholette Lawrence, was investigated by Oregon child protection services for illegal activity and exposing her child to prostitution (she was never charged, but had earlier lost custody of her firstborn).

“We got Raashanai a lot of help,” North explains. “I believed she was on the autism spectrum and just in the short time she was with us, we were able to help her with her language skills.”

North has a background as a special education teacher working with deaf students. She talked about the challenges that children can face in the classroom when they need special attention, and how she worked with the school to give Raashanai the help she needed. “She was struggling, and her mother was struggling too. We just wanted to give them the help they needed to thrive.”

But in 2006, when Raashanai was just three, her mother regained custody and moved to Texas to be with her new husband. The family later moved to Illinois. “We tried to keep in contact,” North explained, “but it was hard. They kept [Raashanai] very isolated.”

For the next few years, Raashanai’s parents would be investigated for child abuse twice. In 2011, Raashanai stepfather was charged with beating her. He pleaded guilty and was placed under supervision. But Raashanai was never taken into protective custody.

The mother began the home schooling jargon shortly after. It is a shock to see that after being on the radar with authorities, she was able to take Raashanai out of school and off the radar.

Mother Nicholette Lawrence, 34, was held on a $5 Million bond. She pleaded guilty on one count of First Degree Murder. She was sentenced to 43 years in prison. She currently lives at the Logan Correctional Center where they keep females in Illinois. She is set for possible parole in September 2057. She is required to serve one hundred percent of her sentencing.

Lawrence apparently had something to say showing guilt and remorse in the court. I’m not one who cares to hear it nevertheless believing it. She said something about hoping to educate other women in prison, which in itself disturbs me. Some people may feel sorry for evil like this. I surely do not.

THE GUARDIAN reports more investigation into home-school in reference to abused children.

Rachel Coleman, the co-founder, executive director, and director of research for the CRHE, explains that while the percentages of abuse-related death among home-schooled children is high, the actual numbers are small. “Only about 4% of school-aged children in America are home-schooled,” Coleman explained, “but when we looked at public records and news stories of abuse cases we would only expect to see 73 total deaths between 2000 and 2012, but the actual number is 84. This might not be statistically significant, but it is shocking considering that the overarching myth of home-schooling is that these parents care enough to teach their children at home, when in fact the opposite is sometimes true.”

A Bill in Illinois was introduced to save these kids. Illinois House Bill 3560

This Bill was tabled in February 2019.

There has been enough cases across the nation of abuse to show that these criminal parents and guardians hide the abuse by claiming they are home schooling their children. When that occurs no one is watching the children. No one is requiring medical care. No one is seeing any signs of abuse. In many cases, the neighbors don’t even see the abused child(ren) at all to the point they didn’t even know that child lives in the home. Something has to be done to the point where either homeschooling is completely removed for children under 18 or requirements come, police are notified of homeschooled children in the area along with DCFS to check on these kids for their well-being and having regular medical care. These homeschooled children should also be taking tests that are monitored by some form of educational system to ensure they’re learning, and learning properly. It is not ok to take children “off the grid”.

It was never said who the anonymous caller was that finally brought first responders to rescue Raashanai. You are thanked, I’m sure by many. We hope you can inspire others to do the same, to bring communities more awareness in hopes of saving other children and others in violent and/or abuse homes.